There is alarming news for Delaware Valley small business owners who advertise on Philadelphia television stations: broadcast TV viewers are disappearing at a rapid pace.

Nielsen reports that halfway through the first quarter of this year, the number of people using television has dropped 7.5%. This compares to -6.3% in the fourth quarter of 2019, and -7.0% a year ago,

"If the trend holds, it would represent the largest quarterly decline for TV viewership in our data set," explains UBS analyst John C. Hodulikadding. "Trends have worsened across most age demos with persons 25-34 now falling -17% vs. low double-digit declines throughout 2019. The persons 55+ demo continues to trend down -2%, similar to 2019 (the first year of declining ratings for the demo)."

Radio listenership, on the other hand, has remained quite stable, according to Nielsen. Since 1970, the medium has reached more than 9-in-10 consumers every week.

Philadelphia radio reaches more consumers every week than all other advertising media, including local TV, social media, newspapers, or streaming audio platforms like Spotify and Pandora. 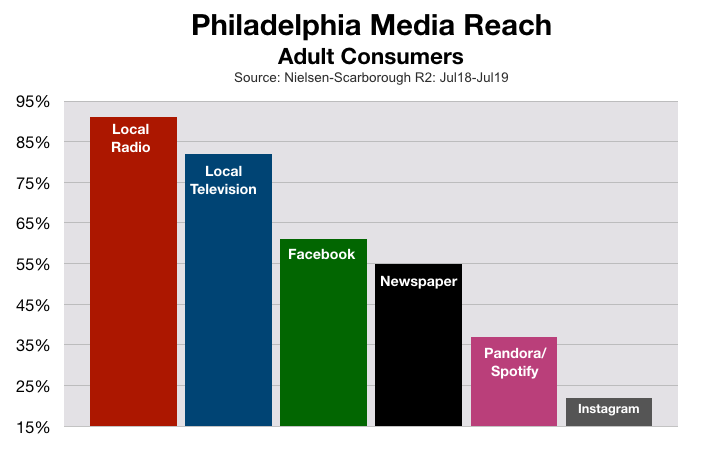 Reach is critical to the success of every advertising campaign conducted by a Philadelphia small business owner. This is especially important when it's crucial that consumers take immediate action.

A study by Nielsen indicates that among all media elements of an advertising campaign, the number of different people reached has the greatest effect on sales increases.

Not only does Philadelphia radio command a significant reach advantage over local television stations, but the medium also provides the best opportunity to ensure consumers hear an advertiser's message frequently. Repetition is crucial when an advertiser's marketing objective is to build or sustain a company's branding.

The most effective way for a Delaware Valley small business owner to create frequency is to invest in those media with the highest percentage of heavy users. 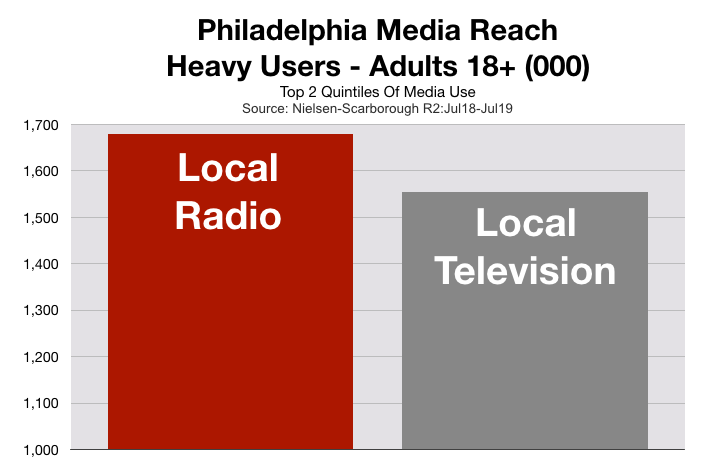 The strongest advantage advertising on Philadelphia radio holds over local television is the medium's strength among younger consumers. This includes adults between the ages of 18-34 and 35-49.  Radio's dominance extends to all other media available to small business owners, as well.

It's reach numbers like this that leads Deloitte, the world's largest business consulting firm, to recommend that "radio advertising should be a big part of the mix for those buying advertising."