What Is The Best Way To Advertise In The Delaware Valley?

If you don't have time to read this entire article, then I will tell you right now. The best way to advertise in Philadelphia and the Delaware Valley is on Philadelphia radio.

Consumers in the Delaware Valley area are expected to spend at least $98 billion at retail this year. To claim a greater share of this giant pool of cash requires local business owners of every size to advertise their goods and services. As Professor Jef Richards at Michigan State University points out, “Advertising is totally unnecessary…unless you want to make money."

The bottom line: It is difficult for a consumer in the Delaware Valley to purchase a product or service from any local company they never heard of.

There are many ways for small business owners to advertise. Options include local newspapers, local magazines, local television, and online. But to achieve the “3-Rs” of advertising success, Reach, Recall, and Return, no other medium delivers results as effectively and efficiently as advertising on Philadelphia radio stations.

The first “R” is Reach. According to a study by Nielsen, after the actual content of the commercial message itself, reach is the most potent advertising element that can drive sales. Reach is more important than brand, recency, or even context. Philadelphia radio provides local business owners with the biggest reach among consumers. 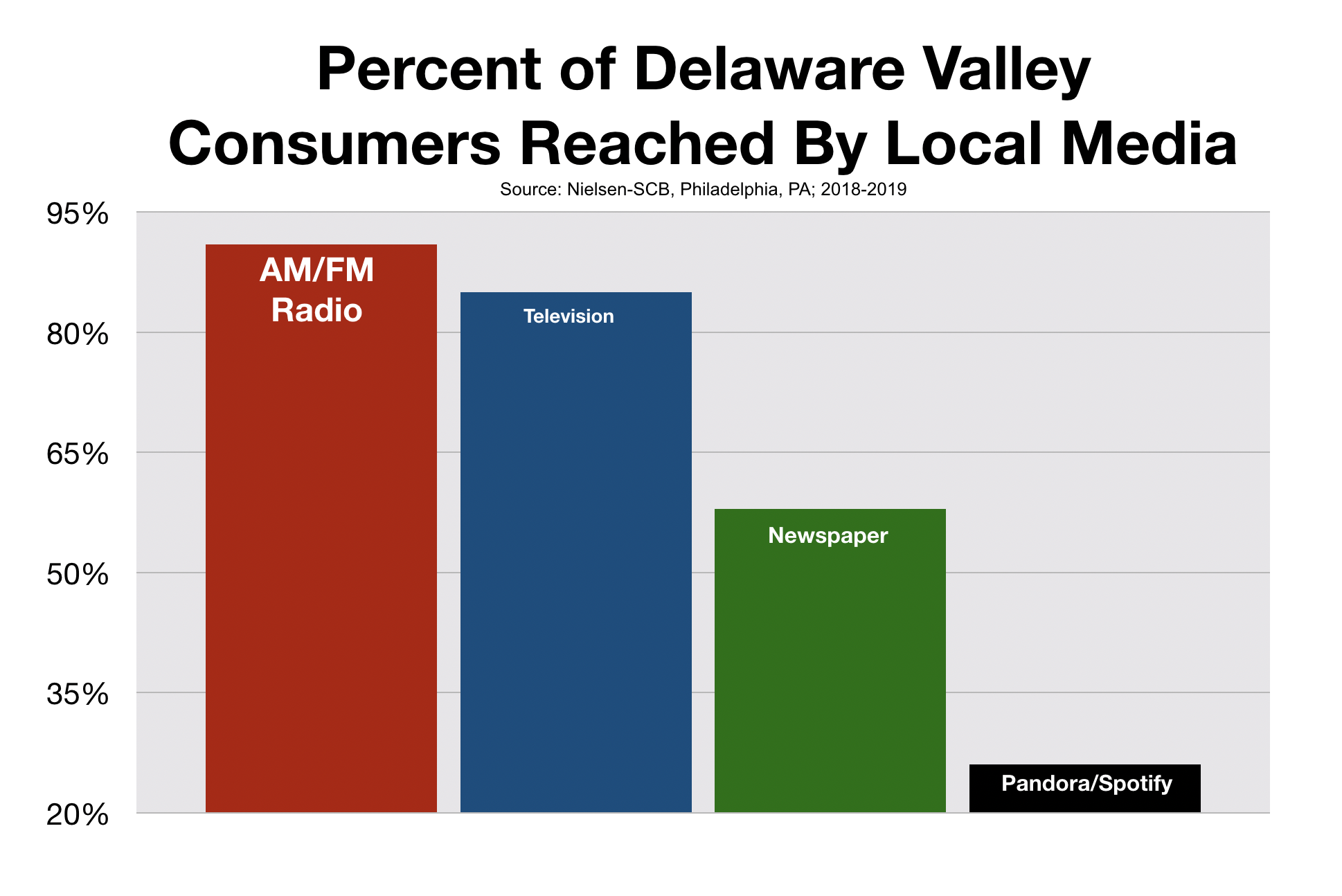 Local radio reaches everyone. Unlike other local media, which tends to skew towards older audiences, Philadelphia radio reaches consumers of all ages. This includes members of Generation X, Y, and Z; Millennials, and Boomers. Everybody. Media expert Gordon Borrell, CEO of Borrell Associates, advises, “Everything we’ve read about listening and aging audiences would have us believe that only our grandmother is listening to radio. Turns out the industry’s biggest supporters, the radio advertisers who foot the bills, aren’t buying that at all. Radio works, and the listeners are telling us in the latest survey data that radio has one helluva return-on-investment."

The second “R” affecting advertising success is Recall. To be effective, advertising must be remembered by the consumer when it comes time to choose which Delaware Valley business owners to patronize.

The third “R” of advertising success is return-on-investment (ROI). ROI is a measurement of revenue growth that a Delaware Valley business owner can expect for each $1 invested in advertising. According to Advertising Age Magazine, when executed correctly, radio advertising can deliver a greater ROI for a local business than investing in TV, digital, or social media ads.

Over the past few years, Nielsen has conducted more than 20 studies to determine how much ROI a business owner could expect when advertising on radio. In every case, radio’s ROI was, in the words of Advertising Age, “Eye-popping.”

The most recent ROI study released by Nielsen is no exception. According to Westwood One, the company that commissioned this latest study, a radio campaign for a men’s personal-care brand produced $11.96 in sales-lift for every $1.00 invested in radio advertising.

Overall, according to Nielsen, among all of the studies conducted, radio ads produce a very impressive 10x return-on-investment. 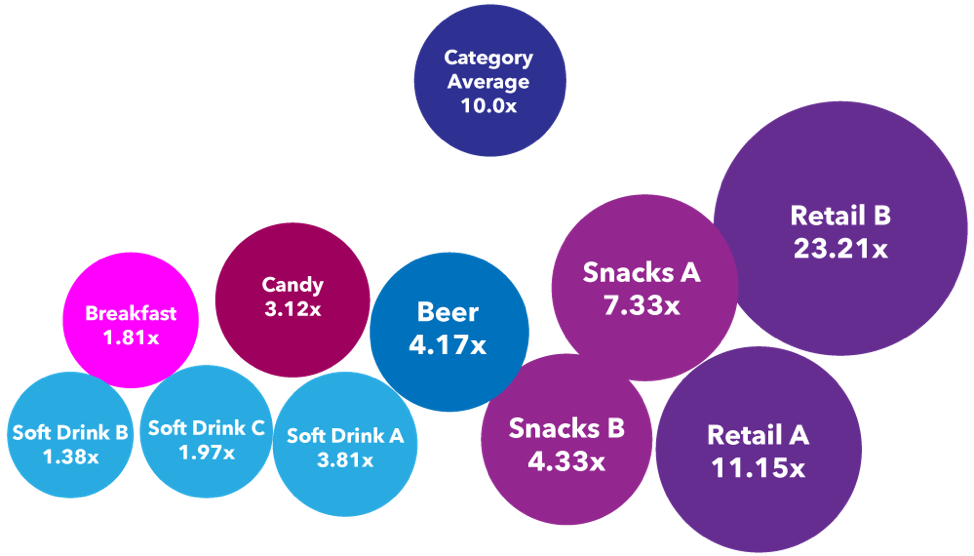 “The implications of results like these are profound for the communications and advertising industries,” Mr. Schoen said, “and as a marketing professional with over 35 years of experience, I found this data nothing short of fascinating. It’s quite clear that we should all be paying more attention to radio, its reach and potential to help our businesses. It’s doing the job with expert efficiency.”

Four years ago, Mr. Nyce began advertising on Philadelphia radio with a single station. The first commercials included the voice of a well-known on-air personality encouraging listener to buy from Landis Block. "Radio personalities have built a lot of trust with their audience," he says. "Using them in our commercials extends that trust to our business."

"These commercials." he continues,  "really don't advertise our bricks and pavers," says Mr. Nyce. "What we really sell are the results: turning a backyard into a paradise."

Nolan Painting is, by definition, a small business. But, this Havertown, PA based company with 125 employees has grown to be the largest residential painting company in the United States.

"Our company's founder, Kevin Nolan, has a goal of increasing sales by $1,000,000 every year," says Ms. Torrisi, "To add that much revenue we always need to find and hire more painters.  Recruitment advertising on Philadelphia radio is a powerful tool to help us stay fully staffed."

According to Ms. Torrisi, hiring qualified candidates is so vital to achieving the company's aggressive growth goals, that Nolan Painting invests 1.5% of total revenue back into recruitment advertising. This is on top of the 4% committed to traditional brand advertising.

Nolan Painting began investing in radio recruitment advertising a little over two years ago.  The decision was based in part on the success the company has experienced with radio's ability to generate new business leads from residential customers.

"The first time we tried recruitment advertising on the radio, we used one station. Our intention was to try it for three months," says Ms. Torrisi. "We noticed immediate results. So, now we are on all year long. We've even added a second station."

"Our Human Resources people have been very impressed with the results of radio's ability to deliver qualified candidates. They have been given a very demanding challenge by Mr. Nolan to hit a 'feet-on-the-street' goal which averages around 100 painters per month."

"Since we started with our radio efforts, the HR team has not missed a monthly goal," says Ms. Torrisi. "The quality of the new hires have been great."

Mr. Nolan and his company have been painting homes in the Delaware Valley for 40 years.  He often says to Ms. Torrisi that "50% of the lawn signs I see in front of houses being painted say Nolan Painting. I want that to be 100%."