Philadelphia radio's over-the-air and online distribution has also fueled the dominance of AM/FM listening among local millennials. This generation of listeners now accounts for one-third of local consumer-spending.

In 2016, local consumers began adopting a new technology, smart speakers, to connect to their favorite Philadelphia radio stations. The smart speaker market is dominated by Apple, Google, and Amazon. Based on estimates from Pew Research, more than 1,000,000 Delaware Valley consumers own one or more of these devices.

Smart speakers are voice-activated personal assistants that can facilitate everyday activities like creating shopping lists and making phone calls.  According to Adobe Analytics, however, smart speaker owners use their device mostly to play music.

According to Triton Digital, 22% of all listening to radio station streams occur on a smart speaker.  This is s significant increase in just two years. 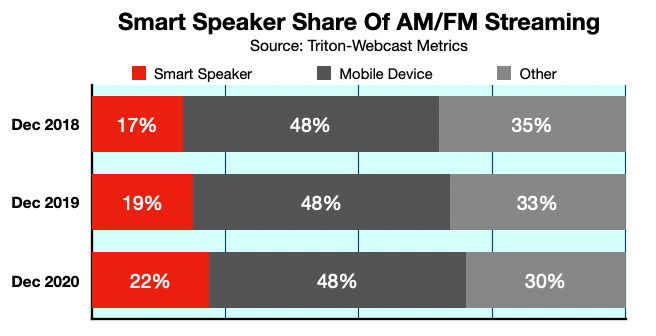 For Philadelphia small business owners who depend on radio advertising to reach local consumers,  smart speakers enhances the medium's ability to reach consumers.

A study by Edison Research finds that AM/FM radio's share of smart speaker use is significantly larger than all other ad-supported audio sources.

As local stations continue to make their over-the-air content easy to access with new digital technologies, advertising on Philadelphia radio will remain a powerful option for small business owners.