Be Heard: The #1 Job Of Every Commercial On Philadelphia Radio 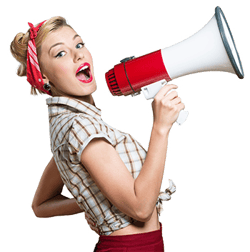 The number one job of a radio commercial is not to sell products for the sponsoring Delaware Valley small business owner.


The number one job is not to build store traffic or to create top of mind of awareness.

The number one job of a radio commercial is not to build brand or deliver ROI.

The number one job of every commercial on Philadelphia radio is to be heard. Period. When a commercial is heard, then all the rest will follow. But being heard is not easy.

At the exact second a radio commercial begins, 11,000,000 other pieces of information are all wrestling for the listener's attention.  Sadly, a consumer's brain is only capable of dealing with about 50 bits of that information at a time.

If you are a local business owner who would like to secure a larger share of the $100-billion Delaware Valley consumers will spend this year, then what you say first in your radio commercial is crucial to winning the battle for a consumer's ear.

Dan O'Day, a successful radio copywriter, explains it perfectly. "The first line of the commercial is a commercial for your commercial."

Some Philadelphia area small business owners don't prepare their commercials for the fight. Instead, they begin their ads with a whimper, not a bang. And that's how an advertiser's world ends. No ringing cash registers. No branding. No top-of-mind awareness. No ROI.

A Violation Of Expectancy

For our own survival, our brains have been wired to ignore the predictable and respond to the unexpected. That's why, in prehistoric times, humans could sleep through the cacophonous sounds of their cave-mate snoring, but wake immediately upon the faint sounds of a saber tooth tiger ambling in the brush outside.

In that same way, when it comes to advertising on Philadelphia radio, a business owner needs to violate s listener's expectancy to be heard.

The 3.8 million consumers who listen to Philadelphia radio stations each week tune-in, on average, for 15 hours. Each of them, then, have come to expect what a commercial sounds like.  Judging by what I just heard during the last hour, over 60% of all advertisements started in one-of-three very common ways.

When a commercial begins in one of these all-to-predictable ways, our evolutionary imperative is to ignore it and place our attention elsewhere.

So what would happen, instead, if the first three seconds of a commercial begins with the odd and annoying sound of a highball duck call.

That's exactly what Time Warner Cable  (now Spectrum) did in a memorable ad.  Speaking from my own experience, because a duck-call was the last sound I expected to emanate from my radio, I listened. My attention was arrested.

As a matter of fact, I listened to the commercial long enough to learn why Time Warner cable was superior to Dish and DirecTV. I probably would have missed all of this had the ad commenced with a more typical opening such as, "looking for a new TV provider?"

A Slap To The Ear

Another example of an ear-grabbing opening line comes from Doom, an insecticide sold in South Africa. The first words of this award-winning radio commercial are, "Someone's getting a lot of action in your bed tonight!"  It turns out that "someone" is a nasty bedbug.

The opening of the Doom commercial slapped me in the ear and riveted my attention because I never expected to hear those provocative words on my radio.  The opening line of this script is so much better than leading with a banal and easily ignored question like, "Are you troubled by bedbugs?" [Click here to hear the Doom radio commercial]

Examining the commercial archives from last February, I can't count how many radio advertisers reached for the 'expected' by proclaiming, in the opening seconds of their ads, that a Presidents Day sale was underway. It was the same as announcing, "attention listeners. Avert your ears. Here comes another commercial."

This is not to say announcements of Presidents Day sales don't have a place in commercials. Just not at the very beginning of the script where every other business seems to put that information.

Famed copywriter Jason Phelps won an award for avoiding the predictable in a Presidents Day radio commercial he produced for Cyprus Air, a Washington, DC area chain of fireplace stores.

Mr. Phelps' commercial began with a ditty where there seems to be more lyrics than musical notes. The opening line of the song is, "John Quincy Adams regularly skinny dipped in the Potomac River where you caught your first fish."  The combination of the misshapen song and the odd words brilliantly violates the expectancy of every listener and compels continued consumer engagement.

Lean-In And Turn-Up The Radio

“Our client was interested in standing out amongst the other advertisers on the radio," says Mr. Phelps. "My co-writer, Jill Belloma and I decided to have some fun with a historical president, and write an opening line unlike anything the listener had ever heard before. We wanted it to be one of those commercials that invited the listener to lean-in and turn-up the radio."

"Once we had the listeners’ attention and made them laugh (or at least smile), then we could make the turn and hold them through the entire commercial and highlight the Presidents Day sale. "

"The advertiser said customers were coming into the store and talking about the commercial," says Mr. Phelps. "It worked very well for us too, by earning us our sixth consecutive Radio Mercury Award."

With all this said, creating an ear-slapping radio commercial is not easy. Fortunately, for Delaware Valley small business owners there is help available.

All a business owner needs to do is communicate their well-defined marketing objective to a reputable Philadelphia radio outlet. The station's creative team will then be able to create an effective, custom commercial.